Although manouche swing is result of real teamwork, being a genre based on improvisation and virtuosity, inevitably, its protagonists are the solists. Just think about Django and Grappelli.

Introducing to you another solist of the Django Feszt 2021, Sidoo (pr. shee-doe) Attila, guitarist to Canarro. Few have immersed themselves into the true manouche interpretation in Hungary the way Attila did. Also, he normally doesn’t speak much so we are particularly grateful for sharing his thoughts with us.

DF: What did jazz manouche teach you?

Attila Sidoo: Good question…like jazz in general, it tought me freedom. I started listening to manouche because of Django. Just the greatness of this guitar itself amazed me right away. I found it really interesting, this way of use of the guitar drew me in. It’s lesser known in our so-called western instrumental culture because it derives from certain eastern strumming techniques. So it’s not really new but it could be for many western guitarists and this is what fascinated me. This would be a long discussion though.

DF: To musicians just getting familiar with this music, what would you recommend?

AS: Forget all they know and start it from scratch, maybe then they will get it. Anything you are learning or you already know is really hard to forget. I know it from personal experience since it took me years to realize ’This is not good like this, it’s not free enough’. But this is how I think. Then, for example, if someone is trying to „solve” or „get” what Django is about, looking at it from the perspective of American jazz guitar playing, that could also be interesting but it doesn’t make much sense without the manouche guitar, I think.

DF: If you could play with someone, anyone, who would that be? What should we listen to by them?

AS: I would really like to play with Django but he was such a strong character that I am not sure that I would play, I would rather listen to him, I guess. Two other musicians come to my mind right away: Biréli Lagrène és Tscha Limberger. When I think of the former I have the same sensation: it sounds so much like Django that I would rather just stay quiet. If I would play with him I would still do it very softly just to hear him better but still, more probably I wouldn’t play.

And what should you listen to by them? In the case of Biréli, it’s quite simple: the set from the 2002 Festival Jazz à Vienne, from the top to the last note. It doesn’t quite get any better than that, I think this is a perfect example of 21st century manouche swing.

And by Limberger…anything. Despite his manouche roots, he is not necessarily a manouche musician but had such formations, especially earlier. In the meantime he learnt how to speak and fiddle in Hungarian, he does an astonishing amount of stuff. For some time now, he likes to jump into everything, at the moment he makes some eastern music. But again, you can listen to anything by him. 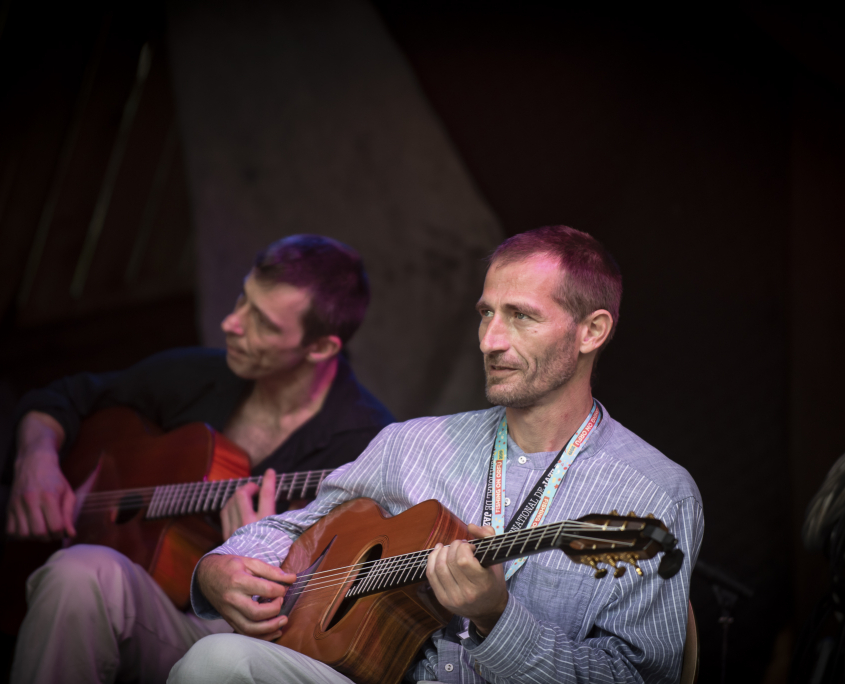